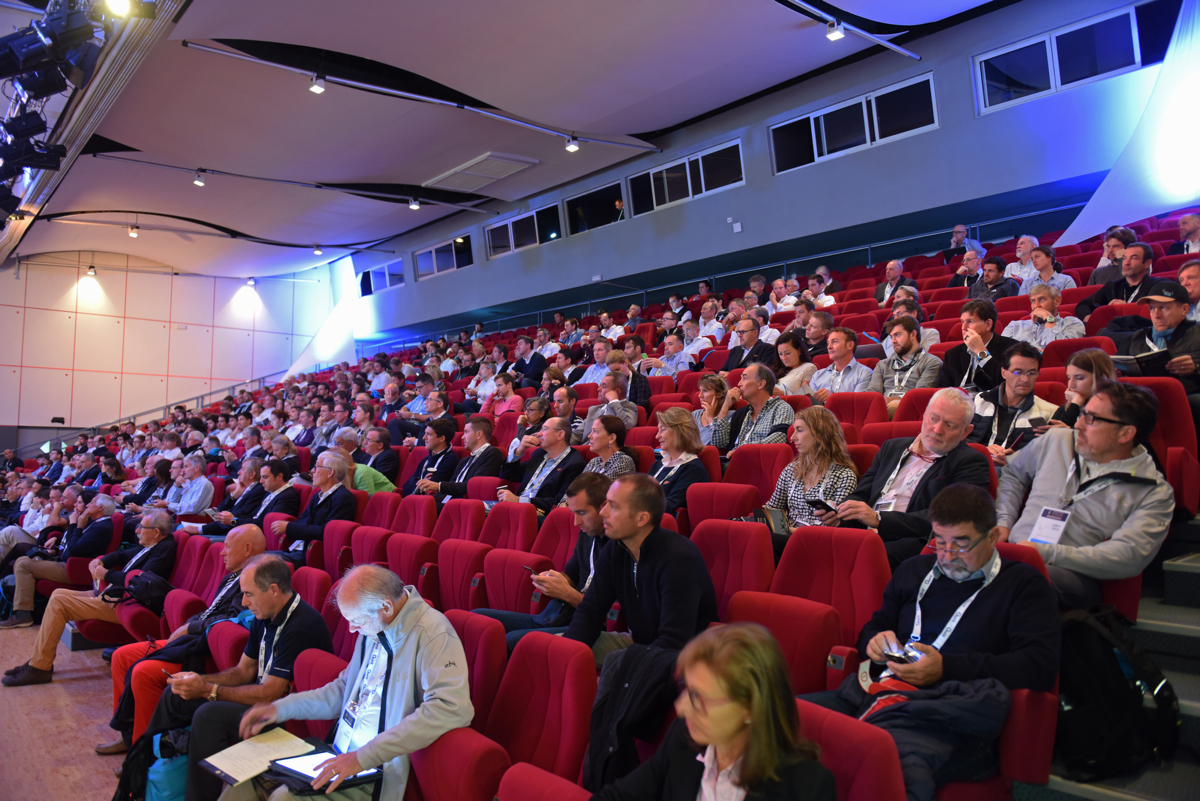 Unprecedented turnout at the Yacht Racing Forum in Lorient, France

Sailing history oozes out of Lorient, where Eric Tabarly is feted as a hero alongside living legends such as Michel Desjoyeaux, Loïck Peyron and Alain Gautier, all of them present at the Yacht Racing Forum.

Peyron shared his passion for cruising and racing on day one of the Forum. “When I’m racing, I’m dreaming about cruising. When I’m cruising, I don’t like to be inefficient. That’s why many of our innovations from racing are useful for cruising.” Technology trickledown was a big part of the discussion, with experts from some of the world’s most successful boatbuilders and sailmakers explaining the application of America’s Cup and offshore innovations to the rest of the sailing scene.

Networking, business and the opportunity to rub shoulders with some of the sport’s big decision makers is another reason for attending the two-day Forum. The high point of the social calendar was Monday gala evening reception provided by North Sails and Bretagne Sailing Valley at the spectacular waterside museum, the Cité de la Voile Eric Tabarly.

Double Olympian and six-time Volvo Ocean Race veteran Chris Nicholson used his keynote speech to call on World Sailing to embrace innovation, and for the rest of the world to take notice of the vibrant and healthy professional racing scene in France. Charles Caudrelier, winning skipper of the Volvo Ocean Race and Bruno Dubois, former team manager of Dongfeng Race Team, explained the strength of the French system and laid out a blueprint for other countries to emulate its success.

Here’s a summary of a few of the topics raised during the Forum.

This year’s Design & Technology Symposium grew yet again from last year, with interest overflowing the room capacity of 150 people in one space. This popularity was due in large part to our location this year in Lorient, the heart of French offshore racing technology and the strong interest and appreciation for advances in all aspects of the following topics: yacht and foil design, sensing technologies and performance analyses, modern film-less sailmaking, advances in standing rigging and composite materials, new fabrication and sustainability technologies in all sectors, and where technology is driving and is driven by parameters within the America’s Cup, Vendee Globe, Volvo Ocean Race and other elite racing events.

Volvo Ocean Race veteran Richard Mason provided some insight into the next edition of the fully crewed around the world race, reflecting on some of the successes of the last race which finished in the summer. “I think the biggest thing we did is people aren’t talking about women on board any more,” said Mason. “People have got used to men and women racing side by side. It’s a non-issue.” While there were a lot of questions from the audience about the cost of a campaign, he reminded people of the value too. “We had a million people live watching the tracker as the Volvo fleet was sailing across the top of Scotland. There’s no other sport that can do that. We need to remember what we’re worth as well as thinking about limiting costs.”

With 123 boats about to start the epic Route du Rhum race from St Malo across the Atlantic to Guadeloupe, there was lots of chatter and anticipation for one of the most exciting races in the offshore calendar. Michel Desjoyeaux said St Malo will be expecting between a million and a million and a half spectators to visit the city during the build-up.

Since winning the Vendée Globe last year, Armel Le Cléac’h has moved out of monohulls and on to his breathtakingly quick Ultime 100ft trimaran, Banque Populaire. “Yes, the boat is capable of almost 50 knots peak speed, but I am interested in high average speed,” said the French hero. He’s looking forward to two weeks at sea on the Route du Rhum, but it is the solo around-the-world race in Ultimes that he is really looking forward to. “The idea of sailing around the world in around 40 days, singlehanded, is a fantastic dream.”

While it is hard to challenge the thrill and ambition of the Ultime trimarans, at more than €10m they are not within everyone’s budget. The Class 40 continues to go from strength to strength as the most successful offshore racing class, with 53 boats set to start in the Route du Rhum. Class 40 promoter and offshore veteran Halvard Malbire claimed the class is one of the most cost effective boats today. While a new boat might cost around €600k, “It is possible to buy a very competitive secondhand boat with good sails for around €250k. It is perhaps the only serious class where private individuals can race against some of the world’s best professional sailors.”

A World Championship of Nations

The founders of the Star Sailors League have announced a new concept, the Nations Gold Cup, which will bring together 40 teams from 40 nations to compete in a keelboat class measuring somewhere between 45 and 50 feet long. The 1996 Olympic Champion in the Finn class, Mateusz Kusnierewicz from Poland, presented the new concept and said Robert Scheidt and Torben Grael were already organising Brazil’s entry into the event.

Nathalie Quéré, campaign director, team AkzoNobel, explained the long and challenging process of pitching a sponsorship proposal to a large corporate organisation. Her presentation was packed with useful information for prospective teams and campaigns looking to secure backing from a big multinational. “Don’t pretend you have all the answers straight away,” she said. “Don’t pretend to be what you’re not. Just start an honest conversation and build a relationship from there.”

Stan Thuret, sailor and film maker, said that it was playing on the game Virtual Regatta that first introduced him to the sport. “I think it taught me the rules of sailing, and then I start sailing a Mini boat,” said Thuret, whose story surprised many in the audience who had voted on the online Forum app to say they didn’t see the relevance of online gaming to the sport of sailing. Thuret’s story suggested otherwise. Producer of the monthly TV round-up of the sport, the World Sailing Show, Matt Sheahan encouraged more sailors to follow in the footsteps of the professional On Board Reporters in the Volvo Ocean Race. “You don’t need much more than a GoPro camera to tell a story and bring back incredible images,” said the Sunset & Vine TV producer.

English producer Rob Dickinson (Orillo Films) was crowned the overall winner of the Mirabaud Sailing Video Award 2018. Dickinson submitted a film recounting team AkzoNobel’s journey in the Volvo Ocean Race 17-18. It was a very dynamic and entertaining one-minute clip that combines sailing, emotions and human spirits. For its second edition, the competition brought together 28 videos, which were viewed online more than 350,000 times.

109 photographers from 25 countries took part in the ninth edition of the MirabaudYacht Racing Image photo competition. Ricardo Pinto (POR) won the main prize, while the delegates of the Yacht Racing Forum awarded the photo of Eloi Stichelbaut (FRA). Brigi Török (HUN) wins the Public Award, based on online voting. To view the 80 best photos, click here.

The 11th edition of the Yacht Racing Forum will take place on 25-26 November in Bilbao, Spain.