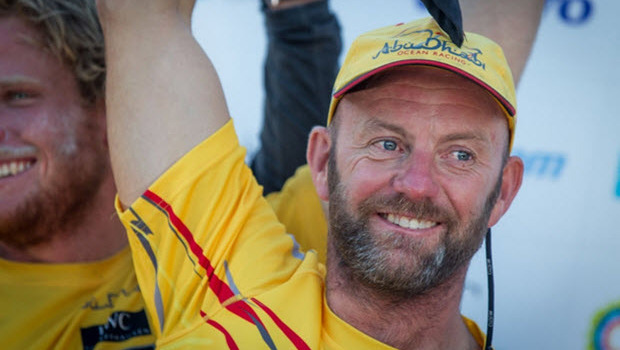 One of the world’s most accomplished sailors, Ian Walker, double Olympic medallist and recent winner of the Volvo Ocean Race, will speak at the Yacht Racing Forum in Geneva, Switzerland, on December 7-8.

Born on 25 February 1970 in Worcester, Ian Walker has won two Olympic silver medals (1996 and 2000); he coached Shirley Robertson and her Yngling team to gold at the 2004 Athens Olympics.

When Britain launched its bid for the America’s Cup 2000, Walker was named as the skipper. Then, in the 2007 America’s Cup he joined fellow Olympic medallist Iain Percy as the tactician of the Italian team +39 Challenge. His America’s Cup commitments were combined with a highly successful TP52 campaign as skipper of ‘Patches’, owned by Eamon Conneely.

In 2008-09, Ian Walker switched to the Volvo Ocean Race and led Green Dragon before taking charge of Abu Dhabi Ocean Racing in the race in 2011-12. He successfully lead the team to victory in 2014-15, also winning the in-port race series and setting a 24 hour distance record of 550.82 nautical miles while approaching Cape Horn.

Ian Walker will share his management skills during the Yacht Racing Forum 2015. Now in its 8th year, the event will take place in Geneva, Switzerland, on December 7-8. It will include a number of new, exciting features and reassemble a world class speaker line-up. Past keynote speakers include amongst others Sir Ben Ainslie, James Spithill, Michel Desjoyeaux, Iain Percy, Loïck Peyron, Sir Keith Mills, Sir Russell Coutts or François Gabart.

The Yacht Racing Forum is the leading yacht racing industry conference and is the only occasion in the year where members and leaders of the industry gather, away from the water, to discuss their mutual challenges and opportunities and make business.

The event will be co-located with the Design and Technology Symposium, as well as – for the first time – the Risk Management & Safety conference.